This past weekend, our family visited the emergency room twice within 24 hours.

Now that I am a few days removed from the crisis, and I can breath normally again, let me tell you how this happened and upset the relaxing, low key weekend that I had planned.

Rewind to Friday night. I was putting the groceries away when the phone rang. It was Steve.  He was calling me from the emergency room, and telling me that he had been in an accident while driving home from work on his scooter.

I was launched into the greatest panic of my life.  The one thought that went through my mind was that he had been on his little scooter, and that no matter what he went up against on the road, everything was bigger than him.

In hysterics, I called my Mom and Dad to come and be with the girls while I high-tailed it to the hospital with my heart in my throat the entire way. My heart stayed lodged in this uncomfortable place until I saw Steve and we spoke to the doctor. Relief.  His leg was a little scraped up, and while his shoulder and arm were sore and difficult to move, nothing was broken.  All in all, no serious injuries - it could have been so much worse. We came home from the hospital with him in a sling. 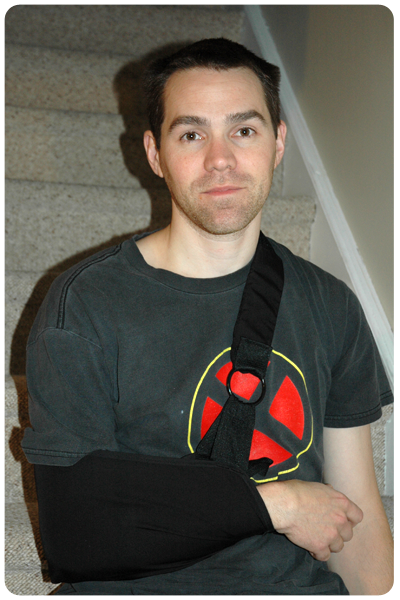 On Saturday we had some errands to run. Simple enough, right? Well, everything was going along nicely until Claire fell. And cracked her head open on a bench in the mall.

There was blood everywhere, she was screaming, Steve had one arm in his sling and one arm on her forehead trying to stop the bleeding, Bridget was in mouth-wide-open shock, and I was in yet another panic trying to get someone's attention in the store so that we could get some bandages/gauze to absorb the blood. It was quite the scene, let me tell you.

Again I had to drive to the hospital with my heart in my throat, this time so that my little girl could get her forehead stitched up. 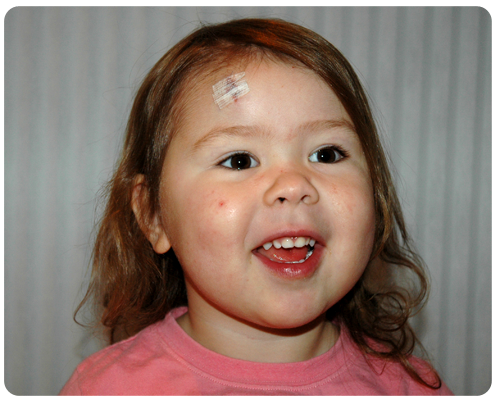 (This photo was taken on Sunday after the trauma had passed.  Claire was not at all fazed by the injury on her forehead, while the sight of it just breaks my heart.  This girl sure bounced back faster than her Mom.)

So, within 24 hours we visited the emergency room twice - Steve was in a sling, Claire had three stitches in her forehead, and I had a few more grey hairs and was completely frazzled.

We stayed home on Sunday - there was no way we were venturing out, for fear of risking life and limb.  By evening, I could finally breath normally again, and could feel the tension leaving my back and shoulders.

The girls spent the entire day playing doctor.  I guess they needed to process what had happened somehow.

I am so glad that my guy and my little sweetie were so well taken care of and that they will heal from their injuries.

But I still can not believe that such madness happened in such a short period of time.

And I have learned something, I am no good in a crisis....I panic!
Posted by Crafty Cucumber at 11:15