There is something so familiar and comforting about getting the same holiday decorations out year after year, and this seems especially true for children. My girls love to go down into the storage room, pull down the box we need, and excitedly take out the decorations that they remember so fondly from years past. Last night this happened as we got ready for Halloween, out of the box came these friends. 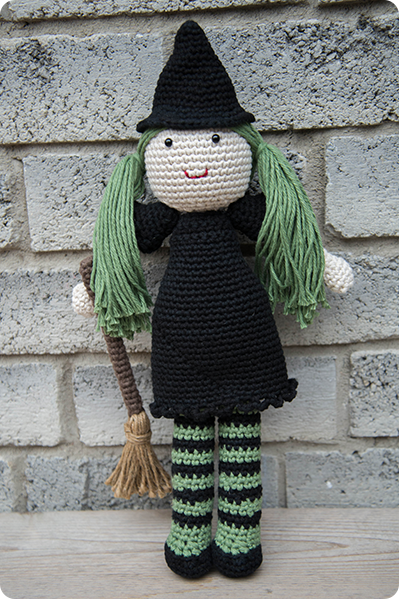 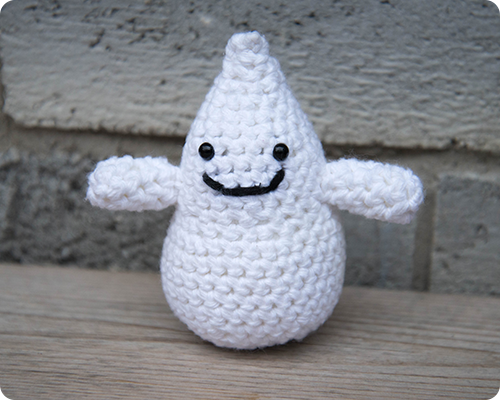 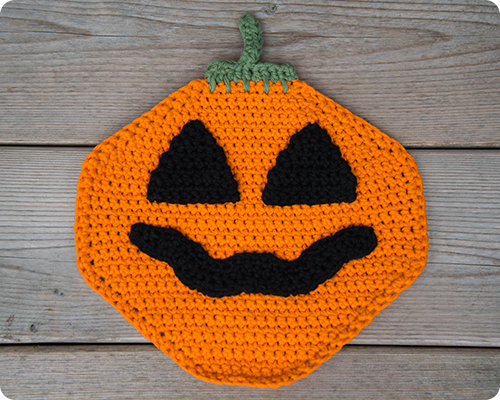 Wanda the Witch, Casper the Ghost, and Smiling Pumpkin Face - crochet Halloween decorations that I made years ago.

The girls remember exactly where in the house we had put each decoration the year before, they remember the games they played with them....they were so happy to see these friends reemerge for another year....

And I remember how the ghost fit so snugly in Claire's chubby three-year-old hand when she grasped it, and how delicately Bridget handled the witch after I finished it and told her how much work it had been - "it needs to be carried carefully, right Mommy" she said.

So many memories in a bit of Halloween crochet...
Posted by Crafty Cucumber at 12:10 2 comments: 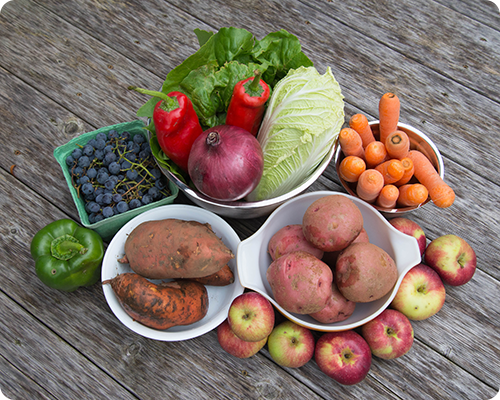 The grapes were delicious, although a bit tricky to eat as they were full of seeds; along with the apples they were a nice addition to our school and work lunches.

I do not like eating green pepper raw, so I diced this one up and froze it for later use. As for the annaheim peppers, the note that was included in our box warned that they could be a little hot so I cautiously tried them and was pleasantly surprised; they had a bit of a kick but not too much.....that is until I accidentally ate a seed. Oh. My. Goodness. My lips and mouth were on fire and there was nothing I could do to make it stop but wait for the burning to go away....which took about twenty minutes, I kid you not. Not fun.

I roasted the carrots with cinnamon, garlic powder, salt and olive oil, a slight variation of the Red Roasted Carrots recipe from The Forest Feast, and they were delicious.

I also tried a new recipe: Sweet Potato Chowder from The Forest Feast Gatherings. This was one of the simplest, most delicious soups that I have made, one that I will definitely be making again soon.

I want to apologize for the lack of food pictures lately. With the seasons changing it is dark by the time we eat dinner - not great for photos - and I have been making lots of soups which do not photograph well (by me, they look great in cookbooks, but not when I take pictures of them).

What have you been eating lately?
Posted by Crafty Cucumber at 07:44 No comments: 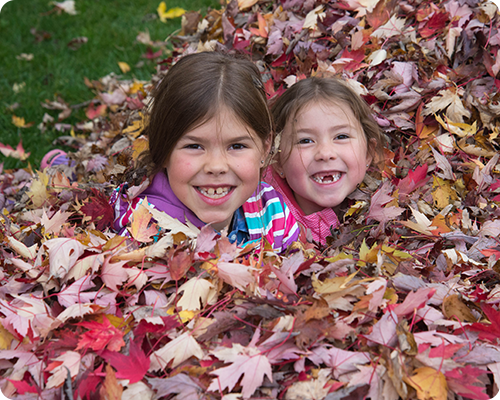 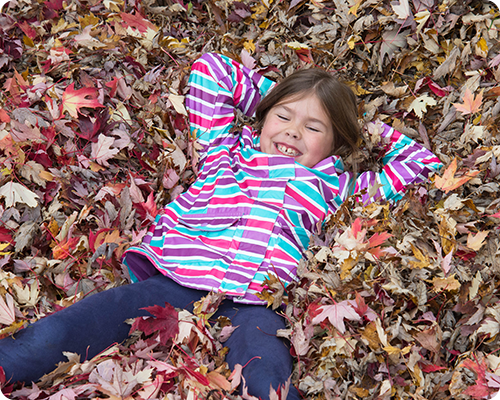 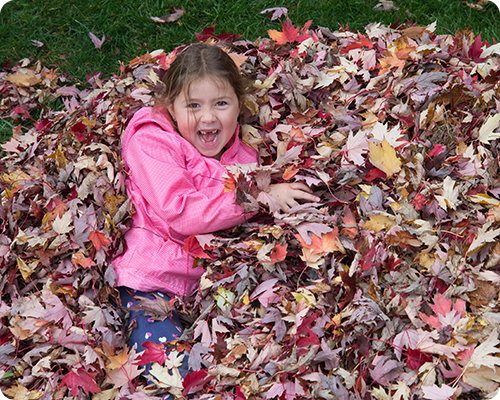 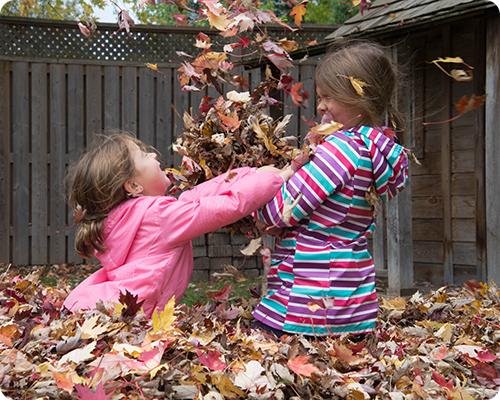 (In this case portraits; sometimes picking one is too hard and I do love the story captured here.)

A perfect October afternoon spent playing in the leaves: running off the deck and jumping into the pile, laughing, throwing leaves in the air and at each other. The weather does not always cooperate - some years the leaves are too wet to play in - but this year was perfect and you girls had such a great time together playing in the leaves.

Joining in with Jodi for the 52 Week Project.
Posted by Crafty Cucumber at 21:35 4 comments:

I have seen quite a few mandalas popping up around Blogland lately and was inspired, obviously, to put my color block blanket aside for a short while and make a mandala of my own. It has been a while since I have made any mandalas (more accurately put, since I became obsessed with making them and ended up with quite the stack) so I was happy to go back to making these beautiful, colorful circles.

I found a beautiful pattern here and set to work using cotton yarn from my stash. 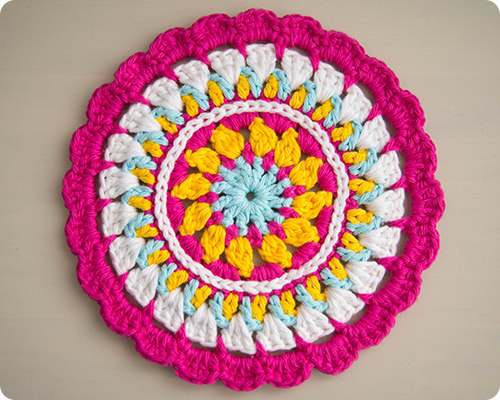 I did not plan out the colors before I began but simply figured it out as I went along; I do really like this three color combination. 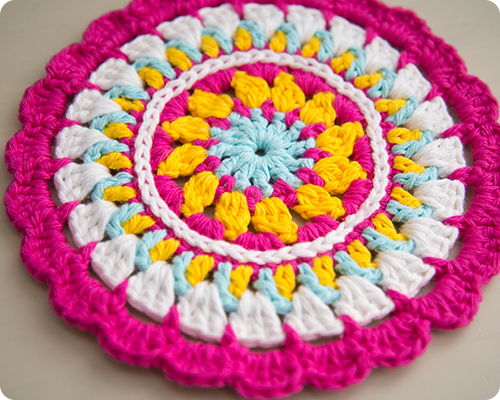 When I was finished this colorful mandala, I got out my leftover yarn from my cozy stripe blanket and made a mandala with it; it may just be impossible to stop at one when making mandalas, they are completely addictive.

This is the first mandala that I have made with acrylic yarn (all my others have been made with cotton) which was a nice change. 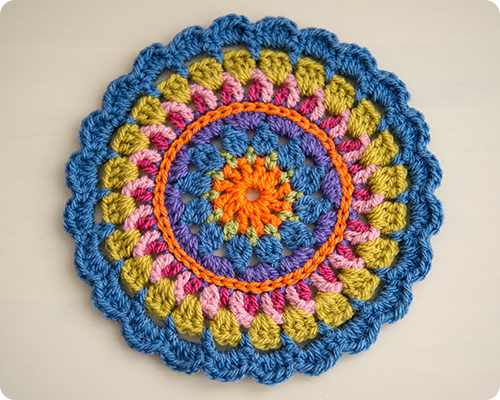 Again, the colors were completely chosen at random, though I used a few more colors in this one. 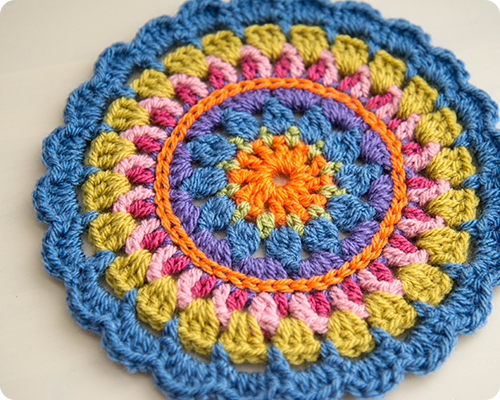 My absolute favorite thing about making mandalas is that it provides a great opportunity to experiment with different color combinations on a small scale....that and they are just so darn pretty.

And I'm not done yet. This gorgeous mandala is next on my list.
Posted by Crafty Cucumber at 07:56 2 comments: 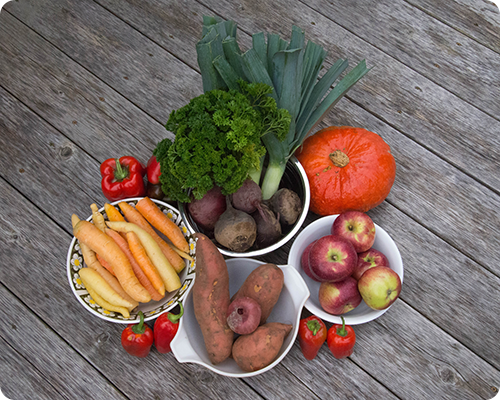 Back in June and July we got so many onions in our box, and now we are getting carrots week after week; feast or famine seems to be the name of the game.

I made more soup this week: potato leek and Thai sweet potato curry....both delicious with a piece of artisan bread.

It was around this time last year that we stopped getting our produce box, so from now until the end (mid November) I am really curious what comes our way; like I've said before I love how this program connects me to what is growing local to me and when it is in season.
Posted by Crafty Cucumber at 10:26 No comments: 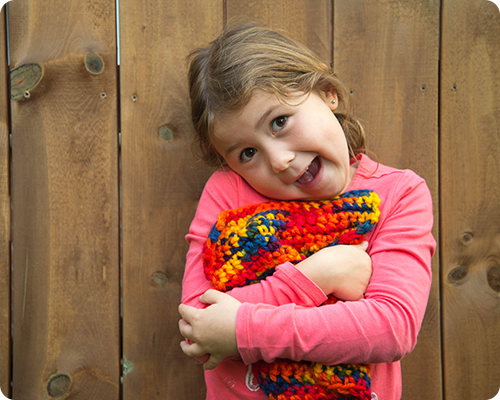 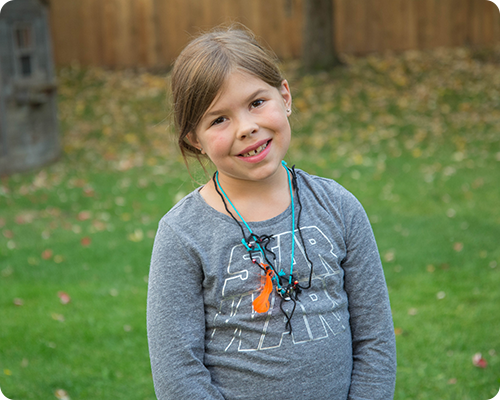 Claire: so excited, posing with your very first finished crochet project - a small blanket for your doll.

Joining in with Jodi for the 52 Week Project.
Posted by Crafty Cucumber at 18:31 2 comments: 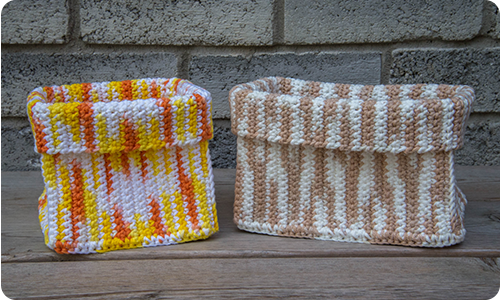 I've made more of these baskets than I can remember. They are simple, quick, and then when they are done, so handy for storing things in. They have become a go-to project for me when I want to make something easy and useful. And they are great for using up leftover yarn from my stash. 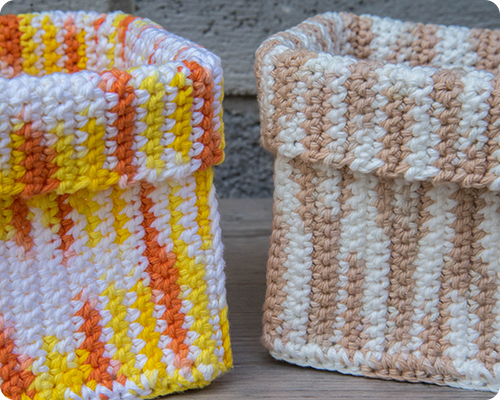 I made the orange and yellow one when we were on holidays this summer - on the plane and while watching my girls and their cousins swimming - it was the perfect vacation/visiting project. I don't have anything stashed away in this basket just yet, but it is only a matter of time.

I started the brown and cream one on holidays as well, but just finished it the other day. This one is destined to hold all my soaps in the bathroom cupboard. I could just put the soap in the cupboard, or put it in a plastic container, but storing it in a handmade crochet basket is so much prettier and adds a homey detail that I just love.

Now for the details should you fancy making a basket for yourself:

P.S. It feels fantastic to be posting a craft project again. Do you remember when this was a craft blog and I posted one project/craft/make after another? Oh, those were the good days. I'm trying to get back to that friends....trying so hard...
Posted by Crafty Cucumber at 10:31 4 comments: 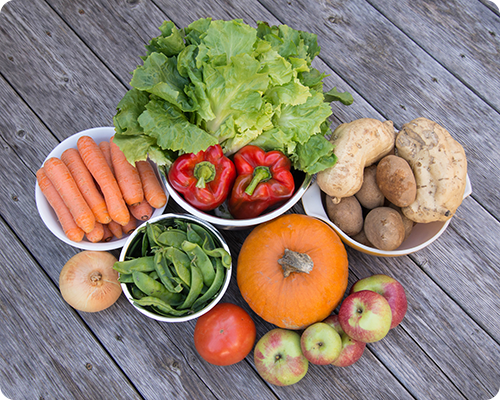 The end of summer and the beginning of autumn in this week`s box: onion, tomato, snap peas, carrots, peppers, curly endive, sweet potatoes, potatoes, apples, apple cider (not shown) and a pie pumpkin.

It was a busy week in the kitchen. In addition to this, our regular produce box, we also got a box from the school as part of their fall fundraiser; needless to say we had a lot of food in the fridge.

I made a few soups - cream of celery and potato leek. The peas were added to a stir fry. I shredded the carrots to make a carrot slaw. We had a big salad with lots of tomatoes for Saturday lunch. Apples and peppers went into our school and work lunches.

The pumpkin is currently sitting on the counter adding a little autumnal decor to the kitchen. Besides that, I am not sure what else to do with it, any ideas?
Posted by Crafty Cucumber at 07:46 No comments: 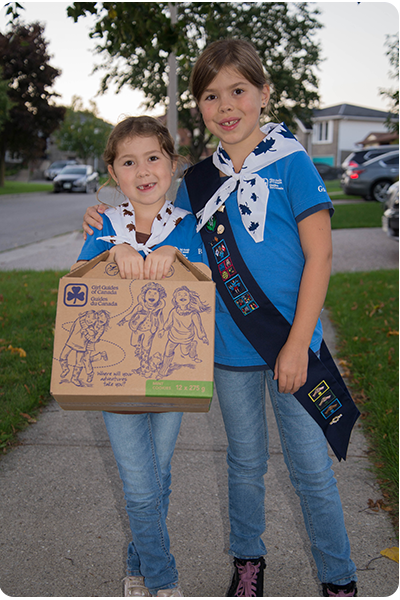 "We are selling a lot of cookies because we have the cute factor in our favor." - Bridget

Joining in with Jodi for the 52 Week Project.
Posted by Crafty Cucumber at 18:06 2 comments: 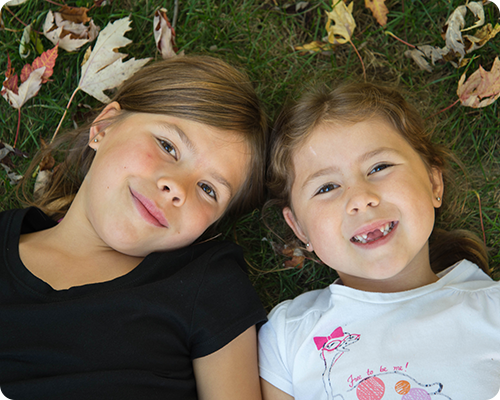 Lying under the tree in the backyard, surrounded by fallen leaves: giggling, whispering, smiling.

Joining in with Jodi for the 52 Week Project
Posted by Crafty Cucumber at 21:07 No comments: 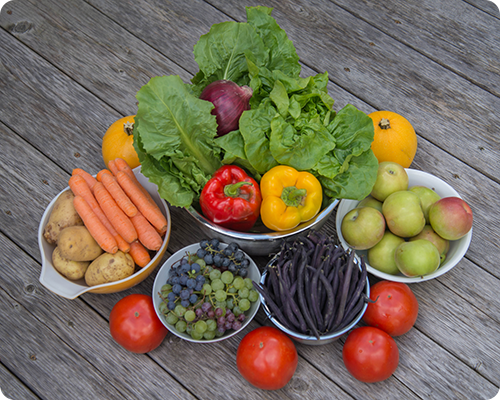 (I wasn't expecting lettuce and tomatoes in our box at the end of September, so that was a little bit of a surprise...)

Last week my copy of The Forest Feast Gatherings arrived on my doorstep. I am so excited to finally have this book; the recipes and menus look delicious and the book itself is truly a piece of art. As I flipped through the pages of the book I was inspired to create my own "forest feast" meal using the produce from this week's box as well as some other ingredients I already had on hand. Sunday seemed like the perfect time to do this since I had a little extra time to get things prepped.  Here is what I cooked: 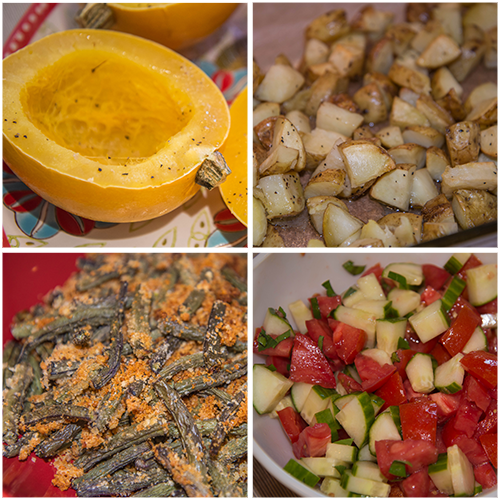 (from left to right)
I lit a few candles, put the food in fancy serving bowls, and we sat down to a delicious family dinner. I just wish I had remembered to buy wine....
Posted by Crafty Cucumber at 21:14 No comments: