Back in the fall I looked at the large bin of cotton yarn that I have in the basement with complete and utter disbelief. I have a lot of cotton yarn and for the most part have no idea what I am going to do with it.

Now I do want to say that I am not against having a yarn stash, in fact I do think it is quite handy. For example, when I came across the pattern to make my crochet hearts, all I needed to do was head downstairs, rummage through what I already had to find a suitable color, and get crocheting. Simple, and no trip to the store needed.

But I do have a lot of cotton, much of it in large 14 ounce balls. I bought all of it at a sale for very cheap (at most, $6 a ball) so there is not a huge financial investment here, but still I felt a little overwhelmed by it all, so I set out to find a project to use up some of my stash.

The project I decided to do was a snake. A long, stripped, colorful snake. Perfect. I selected a collection of coordinating yarns and off I went crocheting round after round, watching as my snake grew longer and longer.... 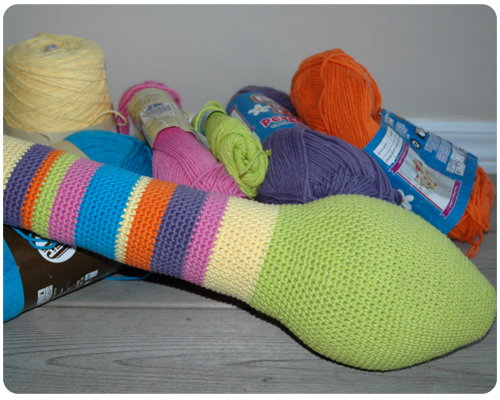 I had to put this project aside before Christmas and when I came back to it in January my excitement had really waned. I thought I just needed to 'get back into it' so I started crocheting round after round again, watching the snake grow longer and longer. And then I stopped.

I suddenly began to think about what the heck I was going to do with the snake after I was finished. The pattern called for 271 rounds, meaning that the finished snake would be over five feet long. Yikes! Where on earth was I going to put him?

Also, because I was single crocheting with cotton yarn using a 4.0mm hook, the snake was very stiff...even with only a little bit of polyester stuffing inside he would not curl up very well which would make him even harder to find a place for. In addition, because he was so stiff I could not hold the project in my lap as I was working on him; I had to hold the working end up near my face and hold the head between my knees. With my arms held up like this while I was crocheting, all the blood ran out of them and they ached; not exactly the outcome I am looking for when I spend an hour or so with my hook. 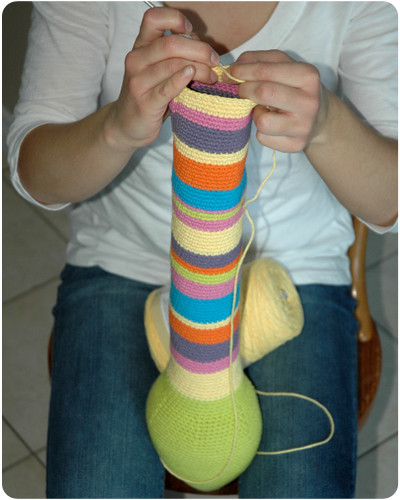 So I abandoned my snake.

I pulled out as much of the polyester stuffing as I could, and was going to toss the poor guy into the trash when I visited my yarn loving friend Jill and told her this story. A look of horror flashed across her face at the mention of yarn being thrown in the garbage, and then she suggested a brilliant idea. Unravel the snake, use that yarn, and some of the cotton in your stash, and make a blanket. From there the ideas came pouring out - a stripe blanket, a granny stripe blanket, a ripple blanket. A blanket for the girls to sit on in the yard in summer. A blanket to wrap up in on the deck on a cool summer evening. It was one of those great occasions when two yarn lovers get all excited at the prospect of a new project and the ideas keep coming. I left our conversation feeling like my snake project had not been a complete loss, that out of it a new and better idea had been born.

So that is what I am going to do. I am going to make a Summer Blanket (likely in the summer) to help de-stash my cotton. I am not sure of the stitch details as of yet, but it will be something simple. Something colorful. And something more useful than a 5 foot long tube.

Have you ever abandoned a project? What was it, and why did you decide to stop.

I felt badly at first, giving up on my snake like I did, but now I am glad to be done with him and happy to be dreaming about the more useful blanket I will make once I unravel him.
Posted by Crafty Cucumber at 09:16